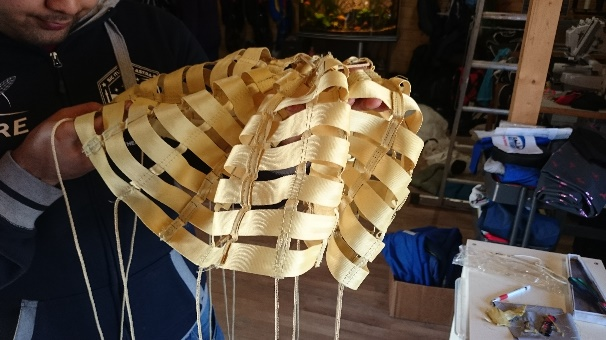 When flying to high altitudes one needs a recovery system that can handle these altitudes and corresponding velocities. Not only does this system need to be able to withstand the high loads of the recovery, it also has to withstand the high dynamic pressures and temperatures.  These strict requirements lead to choosing Twaron® for the hemisflo drogue parachute that is used in the Stratos III Project. The materials used have to be of high quality in order to survive the descent and are sponsored by Teijin Aramid BV. The figure below shows a hemisflo ribbon parachute in the Open Jet Facility at Delft University of Technology. The parachute below has been made out of Nylon for the Aether mission and was also used as a prove of concept test for the Stratos III aramid drogue. 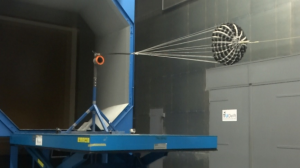 The drag generating area is created by stitching ribbons together. In fact, for the 0.6 m2 hemisflo drogue parachute that was produced, 122 ribbons are used! This also means making the ribbon parachutes is a lot of work. Not only does one need to prepare all the separate ribbons beforehand, the production process itself is also very labour intensive. Furthermore, professional equipment is required to be able to process the strong and resistant Twaron®. 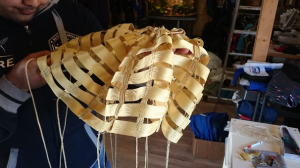 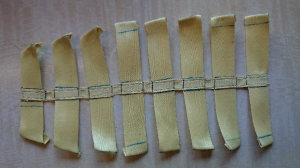 One of the 12 gores that make up the drogue parachute

The parachute is not only made out of ribbons, but also suspension lines and a riser to attach the canopy [the drag generating part of the parachute] to the rocket. Since these lines face the same temperature ranges and even higher loads, they have also been made out of aramids. For the lines, the team selected a different aramid from Teijin Aramid: Technora®. These lines are then custom woven to our needed strengths and thickness by Touwfabriek Helmes Wellink BV. For the riser, even an elastic band is woven inside of the aramid fibres, which give the riser some ability to dampen the parachute opening loads. 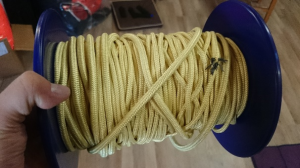 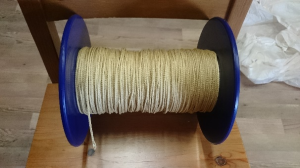 We are very proud to be able to present our first, student-made aramid parachute!

The Stratos recovery team would like to thank Teijin Aramid, Carolines Suits and Rigging service, Gueth-Wolf Band- und Gurtwebereien, Touwfabriek Helmes Wellink BV, and Schappe Technical Threads, for all their assistance in manufacturing this parachute and gaining knowledge on new materials, parachutes and production methods.