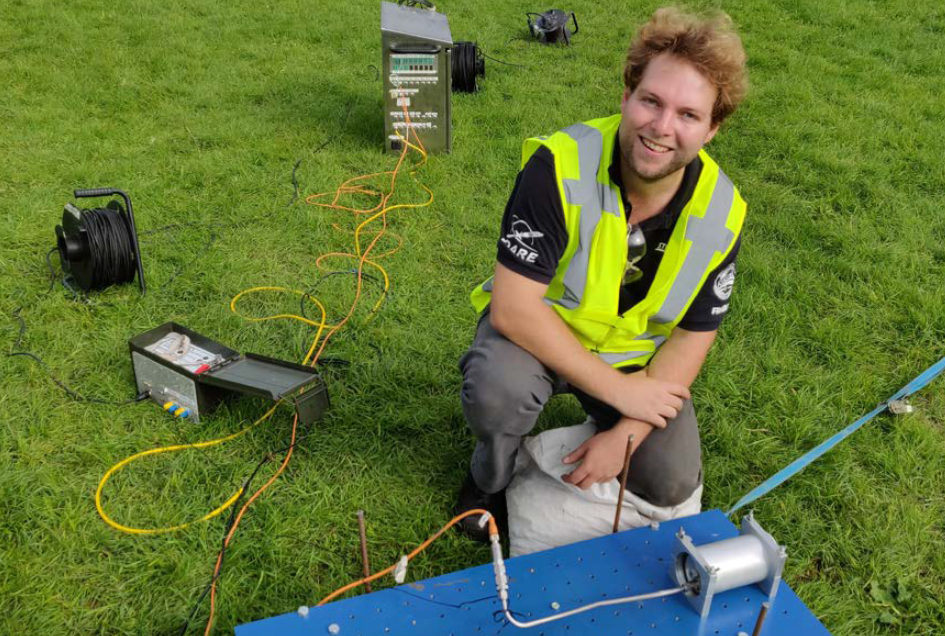 For his Master of Science (MSc) Thesis of Delft University of Technology, of our senior members Martin Olde conducted research on KNO3-sugar based propellants. These propellants, also known as rocket candy, form a group of simple, cheap and safe solid propellants that are used extensively in student and amateur rocketry communities. One of the most frequently used compositions is KNO3-sorbitol (KNSB) with a typical 65/35 ratio by mass. This composition is used extensively by DARE for small experimental launches including the record-breaking flight of Stratos I in 2009 to 12.3 km altitude. However, as I found during my MSc literature study; the KNSB propellant quality over the years has been fairly inconsistent: propellant density was occasionally below 85%, in combination with large surface defects. This has resulted in several explosive failures of larger experimental motors. For my MSc thesis at the faculty of Aerospace Engineering, the objective thus was first to improve the manufacturing process with a better (process control wise) formulation and to measure its effect on propellant combustion and regression characteristics using a ballistic evaluation motor (BEM).

If we have propellant data such as performance (e.g. specific impulse) but also the regression rate as function pressure, KNO3 particle size and grain firing temperature, we can do better predictions of the of a motor’s behavior regardless if we are in Sweden in winter or in Spain in summer. When you consider that chamber pressure can vary by 30 % between these cases, it becomes clear that we need to take this into account during our design. First of all, because we can potentially make the hardware lighter, but also because we occasionally have very strict requirements on for instance tower exit velocity.

To give you some background, KNSB has a theoretical adiabatic flame temperature of 1600 K and a characteristic velocity of 911 m/s at 6.895 MPa. Nozzle performance is dominated by liquid K2CO3 which makes up 44% by mass of the combustion products. This results, similar for all KNO3 based sugar propellants, in low performance, compared to most commercial solid propellants with reported sea level specific impulse up to 125 seconds.

As mentioned I designed a BEM to measure propellant combustion. This small motor was developed with a progressive burn profile and a nominal operating pressure between 2-7.5 MPa. After some hiccups, we successfully fired 13 times with both fine and coarse KNO3 particle size distributions at temperatures between 5 and 25°C. Furthermore, the grains, with a net explosive mass of around 750 grams, were used to investigate the manufacturing process by comparing various production techniques proposed by the amateur community. What we found was that contamination with moisture, especially of the Sorbitol, which has a critical relative humidity around 60% at room temperature was the root cause of the poor propellant quality, and together with tooling changes have allowed the improvement of propellant density to 1749±18.7 kg/m3 (95% of theoretical) with near perfect surface qualities. It is, hindsight is always 20/20, obvious that the problems we have had in the Netherlands with this propellant are generally not observed by our friends working out in the desert. Currently, analysis is still ongoing on performance and regression rates. However, it looks like the typical relations we use to describe the performance are insufficient to fully predict the observed thrust and pressure. As we speak we are preparing several publications to share this data and the lessons learned also with the rest of the high power/ student rocketry communities.

The fun of working with this propellant is that we have no reason to not share our results.
Stay posted!