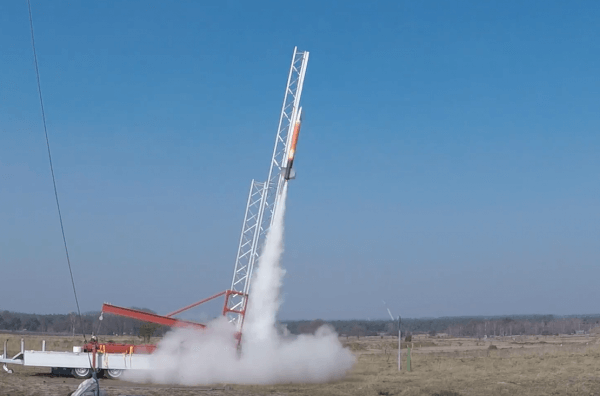 The 29th of March marked the first DARE launch day of the calendar year in the Netherlands. At the sunny heather of ASK ‘t Harde in Gelderland, six rockets were planned to launch, as well as a static test of the Icarus solid rocket motor.

To start the launch day, the DSX Icarus solid rocket motor was fired and successfully burned for roughly seven seconds. The motor tested was a single grain configuration of the full Icarus motor, which will feature seven of these grains stacked on top of each other. The test formed an important milestone for the project, allowing for a full-scale test to follow during the May launch day this year.

After the static tests, the CanSat V7 rockets where prepared for lift-off. These rockets both carry multiple CanSats (small satellites, the size of soda cans) as scientific payload, developed by Dutch high school pupils. The rockets transport the CanSats to an altitude of roughly 1 km, after which the side hatches deploy and the CanSats are released to perform their experiments.

The first launch of the rocket was picture perfect, and both the rocket and all CanSats were successfully recovered after the mission. During the launch of the second CanSat rocket, an anomaly occurred just after leaving the launch tower, resulting in a rapid disintegration of the vehicle. Although a redundant vehicle was present as backup launcher for the competition for these scenarios, the CanSat payloads were seriously damaged and considered unable to fly again. After the launches of the two rockets for the Dutch CanSat competition, a CanSat V7 rocket of the DARE Advanced Control Team was launched, featuring active roll stabilization. Unfortunately, the vehicle faced the same fate as one of the earlier launches: a rapid disintegration just after leaving the tower. The DX1-EE solid rocket motor is one of the flight-proven workhorses of the society with more than 30+ successful launches over the last 10 years. These two consecutive failures indicated not only that faulty hardware was reused but that the problem with the motor was systematic.

An investigation team was formed to find the root-cause of the anomaly. During the investigation, the DX1-EE motors will be tested again, potentially upgraded and re-qualified for flight. Until the root-cause is found, the engine remains grounded. Results of this investigation and testing will be shared with you at a later stage.

Next to the launches of the three CanSat V7 rockets, we also launched two new rockets, ACTiny and Stratos III +/-. ACTiny is a small rocket, roughly half a meter high, also featuring active stabilization by means of four small ailerons located under the fins. The rocket performed its mission and was recovered with minor traces of use. The small vehicle will be re-flown on the May launch day.

We thank the Ministry of Defense for the opportunity to fly these experimental rockets at ASK ‘t Harde. Next to that we thank T-Minus Engineering for helping out on the launch day and lending us their launch tower.