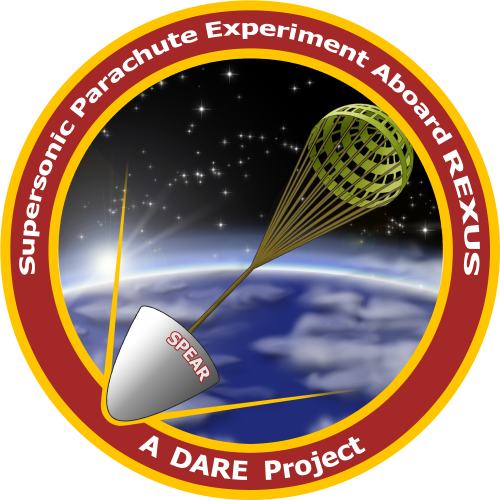 The Supersonic Parachute Experiment Aboard REXUS (SPEAR) is a mission flying onboard the REXUS 28 sounding rocket as part of the 12th cycle of the REXUS/BEXUS program. The goal of the mission is to flight test the Stratos III and Stratos IV drogue Hemisflo drogue parachute at supersonic conditions. 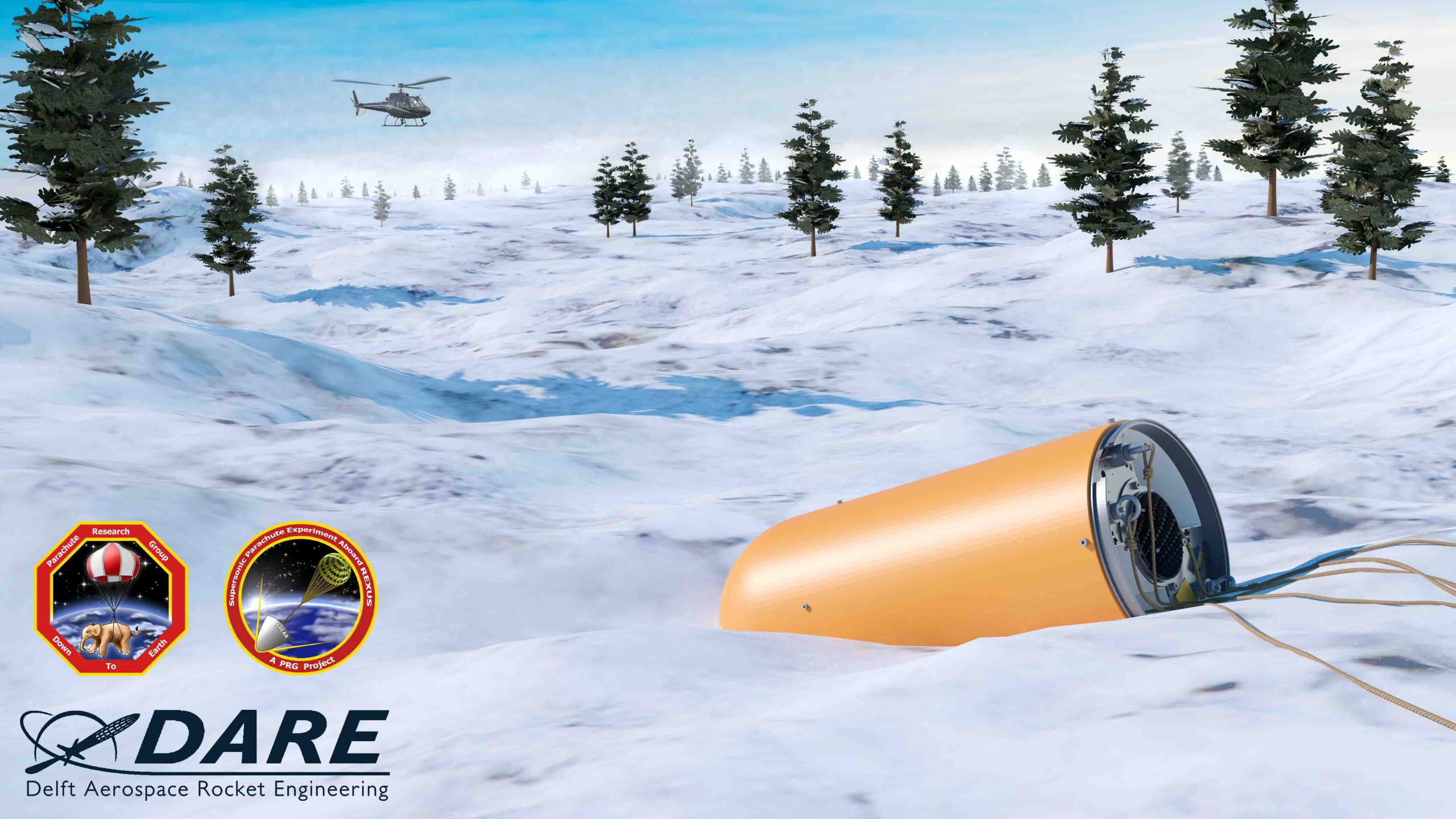 For multiple DARE flagship projects such as Aether, Stratos III and Stratos IV the recovery system makes use of a Hemisflo ribbon drogue parachute. This parachute is selected for its high supersonic capabilities, up to Mach 3.

Within the Parachute Research Group (PRG) multiple tests are performed on all recovery systems to see if hardware complies with all requirements of a project. When looking at a parachute deployment and flight, the two most critical items are the dynamic pressure and the supersonic regimes encountered.

The supersonic flight aspect that the parachute needs to be able to handle, is more difficult to test. Large enough supersonic wind tunnels exist but are very expensive. Next to this, there are still slight differences in loads and behaviour between deployment in flight or in a wind tunnel. Therefore, a supersonic flight test would be necessary to validate the supersonic performance of this parachute.

In the above-mentioned DARE flagship missions, a supersonic deployment of the drogue parachutes is possible. However, the primary goal of the recovery system is to retrieve the payload safely, not to test its own parachutes. Thus, we aim to create as ‘soft’ conditions as possible during parachute deployment to ensure the highest chance of success.

Inspired by SUPERMAX, flown on MAXUS, the launch of a module specifically for testing our drogue parachute would offer a perfect solution. This led to the proposition of a new mission to fly on the REXUS sounding rocket; the Supersonic Parachute Experiment Aboard REXUS (SPEAR).

“REXUS, Rocket Experiments for University Students, is a sounding rocket. In 1995, SSC Esrange invited students from the Swedish Institute of Space Physics in Kiruna to fly experiments in the sounding rocket GPS-Orion-Rocket which they renamed REXUS. Four more REXUS rockets were launched between 1995 and 2007 when an agreement was signed between DLR and SNSB (now SNSA) marking the beginning of the REXUS/BEXUS programme. Today the programme allows students from Universities and higher education colleges across Europe to carry out scientific and technological experiments (REXUS Projects).”

“REXUS, Rocket Experiments for University Students, is a sounding rocket. In 1995, SSC Esrange invited students from the Swedish Institute of Space Physics in Kiruna to fly experiments in the sounding rocket GPS-Orion-Rocket which they renamed REXUS. Four more REXUS rockets were launched between 1995 and 2007 when an agreement was signed between DLR and SNSB (now SNSA) marking the beginning of the REXUS/BEXUS programme. Today the programme allows students from Universities and higher education colleges across Europe to carry out scientific and technological experiments (REXUS Projects).”

“The REXUS/BEXUS programme is realised under a bilateral Agency Agreement between the German Aerospace Center (DLR) and the Swedish National Space Agency (SNSA). The Swedish share of the payload has been made available to students from other European countries through a collaboration with the European Space Agency (ESA). EuroLaunch, a cooperation between the Esrange Space Center of SSC and the Mobile Rocket Base (MORABA) of DLR, is responsible for the campaign management and operations of the launch vehicles. Experts from DLR, SSC, ZARM and ESA provide technical support to the student teams throughout the project. REXUS and BEXUS are launched from SSC, Esrange Space Center in northern Sweden.”

Source for the text and image: http://rexusbexus.net/rexus/

SPEAR was accepted for flight in December 2018 after a selection workshop at ESA ESTEC. Here the mission was judged by members of the REXUS/BEXUS organisation. In February 2019, part of the team travelled to DLR Oberpfaffenhofen(Germany) for the preliminary design review. Here the team got very valuable feedback that allowed the design to be improved. These improvements have been processed and will be presented in the Critical Design Review (CDR) in June 2019.

Over the summer of 2019 SPEAR will be built, integrated and tested. During the last months of 2019, the test vehicle will be integrated with the REXUS service module for testing. Early 2020 this will result in the bench testing. This means that, after these two milestones, REXUS 2018 including SPEAR are ready for launch! 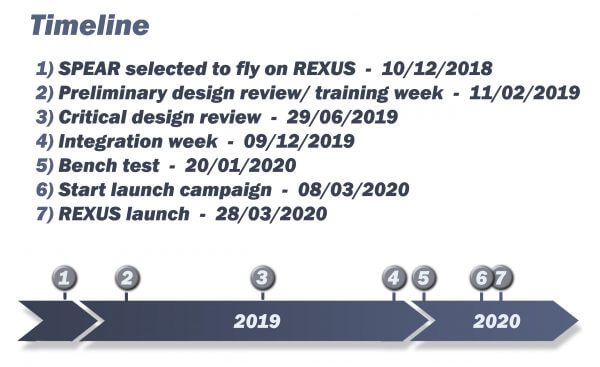 The launch of SPEAR will be launched in March 2020 from the ESRANGE launch site. This launch site located in the north of Sweden is ideal for experiments such as SPEAR. After the launch, the data will be processed and taken into account for future DARE mission.

The SPEAR vehicle will be carried aboard the REXUS sounding rocket on a near-vertical trajectory. During the ascent, the rocket’s nose cone will be ejected after which SPEAR will separate from the rocket. After reaching its highest point of roughly 80 kilometres, SPEAR will start to accelerate during its descent. Because of the aerodynamically unstable shape of the vehicle, a stabilising parachute will be deployed. After accelerating to supersonic velocities larger than Mach 2, the supersonic drogue parachute will be deployed at an altitude of tbd kilometre. When sufficiently decelerated, two main parachutes will land the vehicle safely on the ground, after which the vehicle can be retrieved. 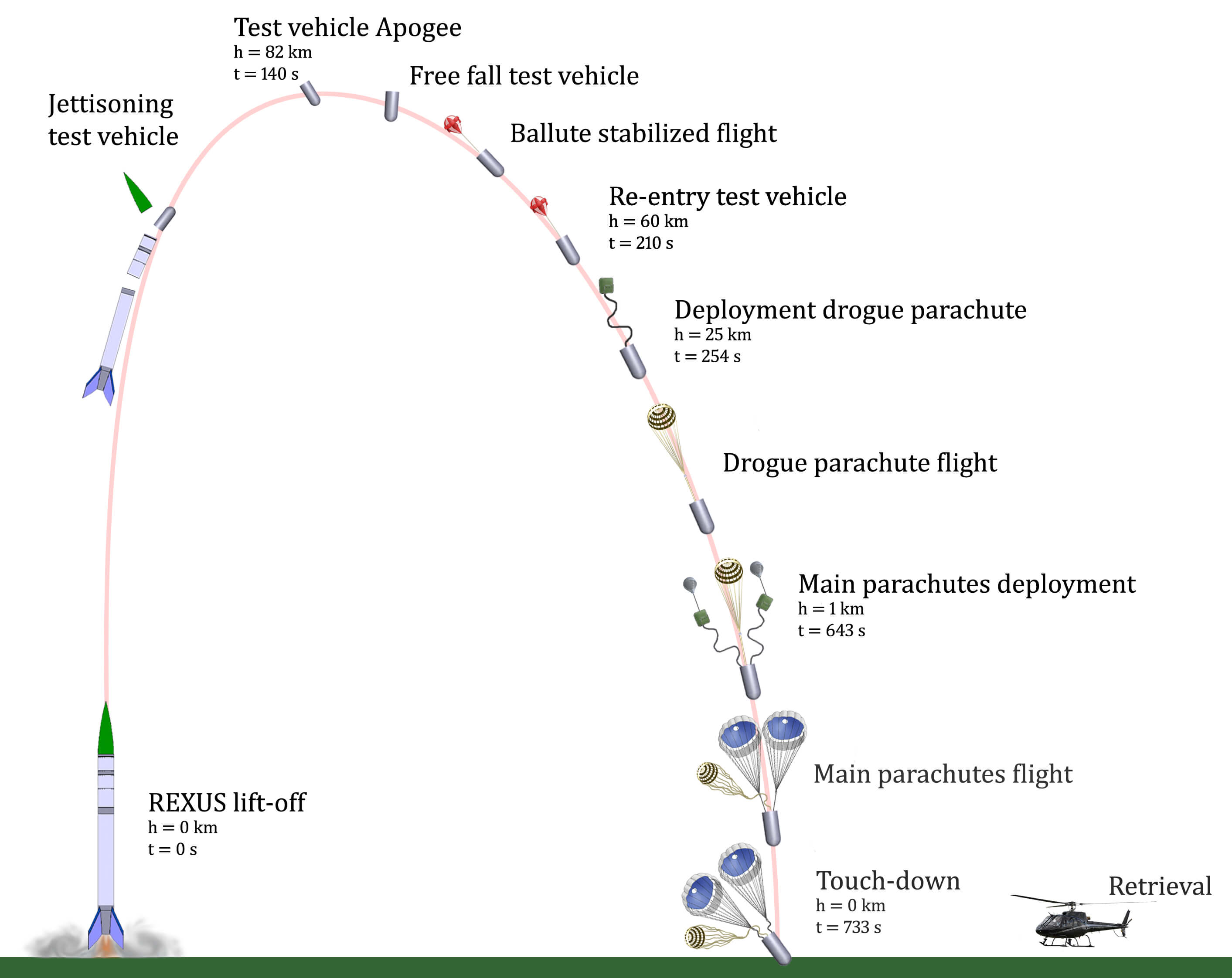 SPEAR has written different articles about the design of the vehicle, each one of the articles was/will be presented at one of the following conferences:

In the beginning of July 2019, SPEAR gave a presentation at the European Conference for Aeronautics and Space Sciences (EUCASS) on various parachute deployment systems, where the reasoning for the use of a hot gas deployment device for the drogue parachute and a spring mechanism for the main was explained.

In September 2019, the 3rd Symposium on Space Educational Activities (SSEA) will take place. In this symposium, SPEAR will present the conceptual design of the SPEAR vehicle.

In October 2019, SPEAR will present about the trajectory sensitivity analysis of the SPEAR mission at the 70th International Astronautical Congress (IAC).