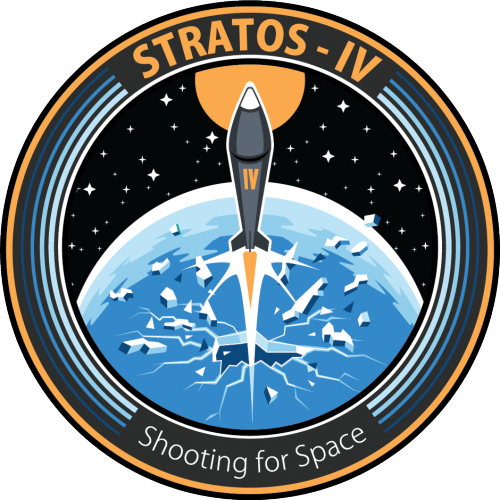 Stratos History
support us
Join Us

We are updating you all that the team has decided to not go through with the launch tonight. Troubleshooting with the Quick Disconnect (QD) throughout the day did not lead to a solution that the team was confident in or predictable, but most of all safe. After discussions between management and the crew at the pad, it was deemed infeasible and unsafe to continue any further. As this was our final launch window, the team has no other option than to return to Delft.

The goal of launching the Stratos IV rocket was, besides showcasing the huge leaps in the capability of students and breaking the European record, to allow students to gain hands-on experience with designing, building, testing and finally launching a real, space-capable rocket. Of course, it is disappointing for the team that not all mission goals were met, but it’s still a great achievement to have finished the rocket, fundraised enough to launch, and made it to this point, all through the Covid-19 pandemic. Even more impressive is the amount of troubleshooting the team has done the past six weeks on some of the greatest challenges they have had to face yet, often with incredible time pressures and little sleep. The most important part of launching is doing so safely, especially when things don’t go according to plan. Therefore, we know this is the right decision as safety is always DARE’s top priority, but a challenging one to take given how much work has gone into this.

In the short term, the team will spend the coming days packing up and preparing for its return to Delft. Any discussion about the future of the project is up to the members of the team and the rest of DARE and will take place after its return.

We wanted to extend our thanks to all of you. Family, friends, sponsors, professors, fellow rocket enthusiasts and students alike, you have all had a part in our journey and for that we are eternally grateful. We would also like to thank @intaespanaet for their support through the years and the past 6 weeks while we’ve been here in particular. In the end, it is not certain what the future holds for this project and DARE, but our heads will remain focused in the same direction: to the stars.

Previous
Next
Previous
Next
Stratos is the flagship project of DARE. Many years of knowledge and research are combined into a single, ambitious
project. The objective is to break the European altitude record, which is currently at 32.3 kilometers, with a rocket fully designed and built by university students.

At the end of August 2018, work on Stratos IV began. We are determined and committed to achieving our mission:

“Design, build, test, and launch a rocket which will break boundaries in Fall 2021.”.

Many new design choices and modifications are being implemented onto the Stratos III design, which showed potential but had room for improvement. We are ready to launch the most advanced rocket built by students in Summer 2021.

Stratos IV is designed and built by a team of 16 full-time and 60 part-time engineering students from Delft University of Technology.

Stratos IV could never have been built without the support of all her partners from industry and academia.

Launch SITE
Stratos IV is a 8.3m tall sounding rocket designed break records. Over 120 students over the
span of 3 years have dedicated their time and effort to make it a reality.

All of the components are designed, produced, and tested by us. However, some parts require help from our partners, such as the 3D-printed titanium nozzle.

The brain of the rocket. 7 custom-designed PCBs control parachute deployment, flight data storage, control of the telemetry systems, and more. It  includes IMUs to measure the accelerations in flight, redundant black boxes, and static pressure sensors.

Ensuring a safe landing. A dual parachute system, with a drogue and a main parachute, slows down the nosecone before touch-down. A new hot gas deployment device allows for drogue parachute deployment in supersonic flight conditions. The recovery plate, takes all the parachute forces, and can hold more than 1600 kg! A heat shield protects the delicate parachute wires.

Designed by our recovery team, ejected after nosecone separation, and pulls out the main parachute.

Making sure that the rocket is stable during flight. 4 nitrous oxide monopropellant thrusters, producing 40N each, keep the roll rate of the rocket within reasonable bounds.

Holds 174kg of nitrous oxide, stored at 60 bar. It uses an 1.5mm thick aluminium liner overwrapped with carbon fibre to increase strength and stiffness. The oxidiser tank makes up most of the rocket, standing over 4.7m tall.

Controlling the engine. It allows for the flow of 6kg/s of nitrous oxide from the oxidiser tank to the combustion chamber through the feed system in its centre. The engine control unit controls all the valves and motors in the engine bay. The flight termination system allows for a safe launch, automatically terminating the flight if the vehicle flies out of a predetermined safe-to-fly zone.

Using multiple layers of composite materials to hold the pressure and heat from the hot gases inside the combustion chamber. Large fins ensure stability of the rocket during ascent.

This design saves 10kg from the full graphite design that was used in Stratos III. Small pieces of graphite is used in the hottest parts of the gas flow, which can reach 3000K, while a titanium shell coated with zirconium-oxide is used at the cooler parts of the combustion gases.

Stratos IV is launched from El Arenosillo Test Center (CEDEA) located near Mazagón, Spain. After ignition, the vehicle starts its journey to space, powered by the DHX-400 ‘Nimbus’ hybrid rocket motor. 29 seconds in the flight, the vehicle runs out of propellant and the engine is shut down.
However, the vehicle still has an unprecedented velocity and has already passed the most dense layers of the atmosphere, giving it enough kinetic energy to reach beyond the current European record at 32.3 km. After the rocket has reached its apogee, the nosecone with recovery payload separates from the booster and starts a re-entry, followed by a series of two parachute deployments to slow down the nosecone for sea recovery. The booster is not recovered.

The first Stratos rocket was launched from Kiruna, Sweden in 2009. This two-stage, solid propellant rocket reached an altitude of 12.3km, which at the time set the European altitude record for student rocketry. Stratos II, the successor of Stratos I, was meant to fly even higher than that, but unfortunately did not lift off due to a misfire of the engine. This lead to a redesign of the rocket, namely Stratos II+. Launched in October 2015 from an INTA facility in Huelva, Spain, Stratos II+ flew to an altitude of 21.5km, breaking our own record set by Stratos I.

Recently the record was broken by the Hybrid Engine Development from Stuttgart, Germany, setting it to 32.3km. Consequently, DARE decided to combine the knowledge that was gained during the Stratos I and Stratos II projects to develop Stratos III, which was being designed to go well beyond that boundary and improve the European student altitude record. The rocket was launched on the 26th of July 2018 from INTA in Spain. 20 seconds into the flight it encountered an anomaly and the vehicle disintegrated. The Stratos III team worked incredibly hard over the past two years and while we were disappointed by the failure, the Stratos IV team recognizes the potential of the Stratos III design. The Stratos IV rocket will, therefore, be heavily based on Stratos III.

A special thank you goes to everyone who supported us during the crowdfunding campaign of Stratos IV: 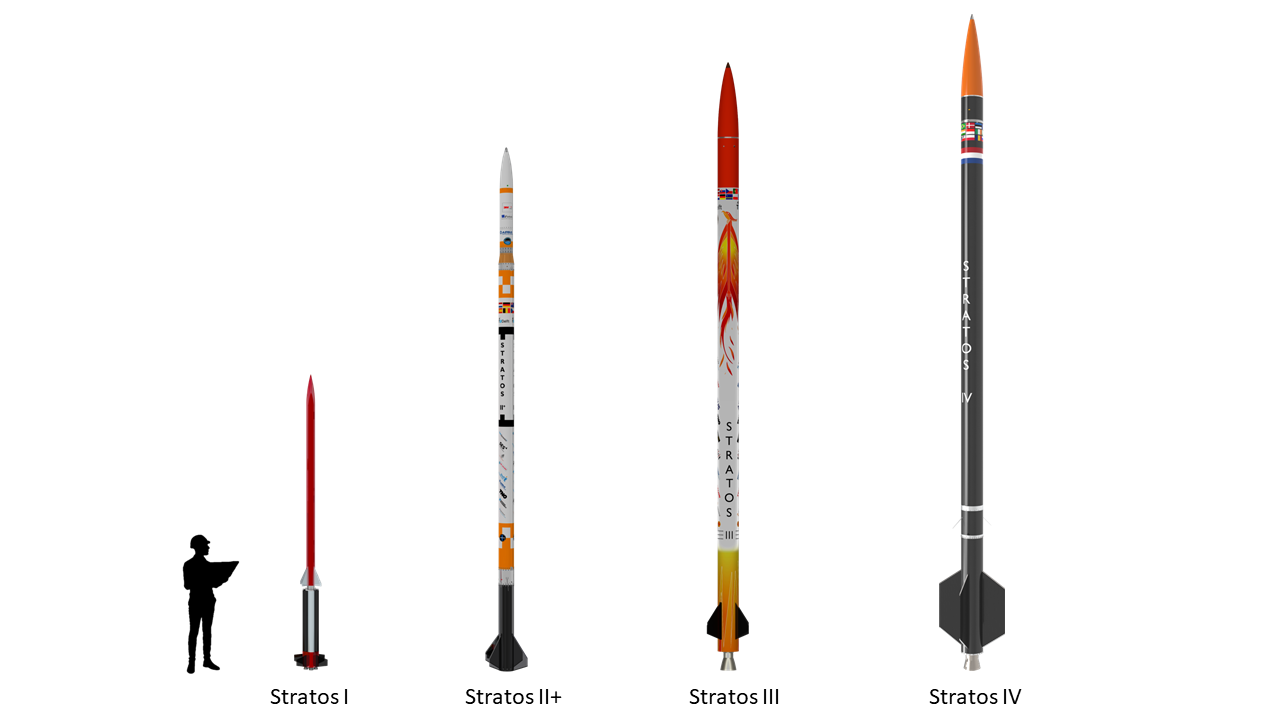 Project Stratos is carried out under the flag of Delft Aerospace Rocket Engineering, however it falls under the legal responsibility of Stichting Students to Space.