The Parachute Research Group (PRG) works on expanding and improving the already available recovery systems, while coming up with new concepts. PRG is currently working on different projects, such as SPEAR, Stratos IV, PIP and project Aether. 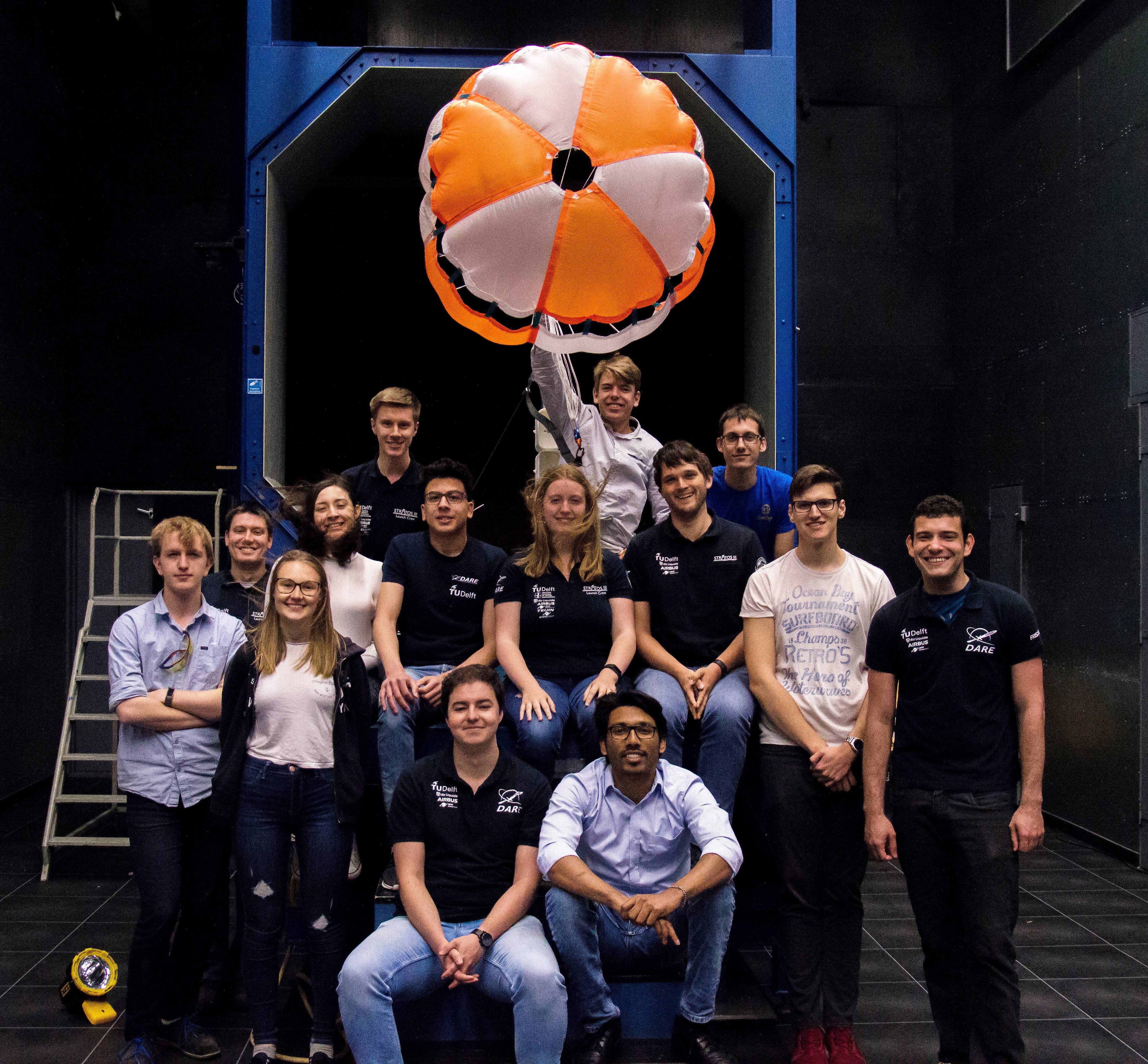 For the academic year of 2019-2020, PRG is working on two flagship projects simultaneously: Stratos IV and SPEAR. Aside from this, the team has multiple test series in the Open Jet Facility (OJF), a low-speed wind tunnel of the TU Delft. These tests are used to gather valuable data on the performance of parachutes in terms of drag and stability. Additionally, the team focusses on different research and development (R&D) projects throughout the year that can be implemented in future missions.

After the flight of Stratos III, DARE went on to find a new challenge. This challenge soon became to become the first student build rocket to reach space. PRG was, just like for Stratos III, assigned for the development of the recovery system. For this, several new members have been recruited and they have worked on the updated design. New features include a pyrotechnic actuation for the drogue deployment device instead of using CO2 and a new Disk-Gap-Band main parachute. The first set of flight hardware has been produced and the systems are currently being tested on subsystem level. The plans for next year include further small scale testing, integration, and system level testing.

During the development time of Stratos III, the team found that there is a lack of opportunities for testing parachutes. The team has the Open Jet Facility (OJF) of Delft University of Technology available for testing. However, with a top speed of 30 m/s, the parachutes cannot be tested at the desired dynamic pressures. For this the team looked at flight tests, however, there were no launchers available that could do a high dynamic pressure test in a reliable way. Therefore, the team started the development of the PIP launcher. Based upon the CanSat v7 launcher, the team has spent half a year on the development of the first vehicle, aiming to perform the first test of the vehicle in March 2019. Unfortunately, during the launch campaign, a structural piece of the rocket was damaged and there were insufficient resources to repair it on the spot. The first launch of PIP is now scheduled for September 2019. 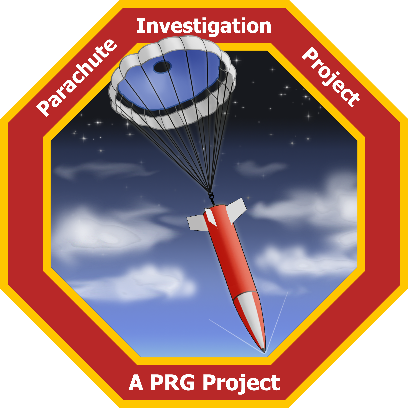 PRG has two in house developed simulations tools, ParSim and TumSim, that can predict the free fall behaviour of objects. ParSim is a conceptual design tool that can assist in the concept development of a mission. TumSim can predict the free fall behaviour of aerodynamically unstable objects and thus requires more inputs. This makes it a tool used more in the preliminary and detailed design phases. The work resulted “Flight Simulations of the Stratos III Parachute Recovery System” presented at the IAC 2018 in Bremen. During the development of ParSim the team found two additional desirables; a wind model and round earth model. These are currently being implemented in version 4.0.

Besides the larger projects, PRG has several research and development projects for future use. These include short research for other projects or upgrades to PRG hardware.

Return to Base (R2B) – In windy conditions payloads under parachutes can drift far away after deployment. For the Stratos missions, it can be seen that by boat it takes a significant time to travel to the payload, during which the payload drifts even further. To mitigate this risk PRG has been working on a steerable parachute that allows the payload to fly to a predefined landing location or area.

While a typical parachute is great at slowing down a payload, it has one major disadvantage, it can’t be controlled. The aim of R2B is to develop a steerable, parafoil like parachute, allowing to increase the control during descent. Using such a parachute and control system comes with its own set of challenges, however, the benefits justify the additional complexity. A parafoil makes it possible to increase the rate of descent, while still being able to perform a soft landing, thus reducing the risk of excessive wind drift. Another big advantage of a this is being able to steer the parachute towards a given area which allows for quicker and easier recovery of the payload after touchdown. 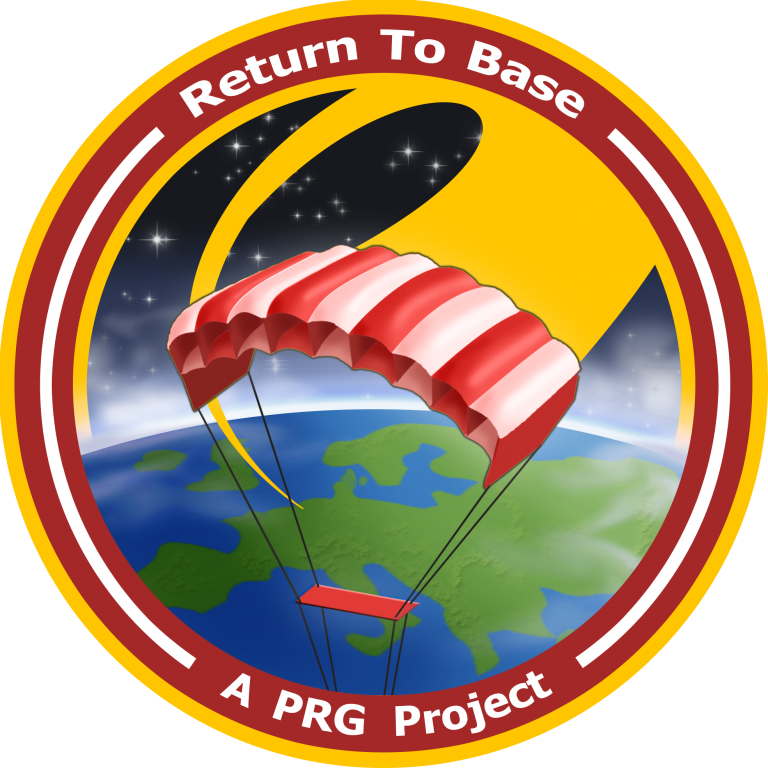 Hot gas deployment device (HGDD) – During the development of Stratos III, it was seen that about half the mass of the Cold Gas Deployment Device (CGDD) was in the feed system. Furthermore, from the PDD parts, the feed system was most prone to leaks and failures. In order to mitigate both, the team is investigating the usage of pyrotechnics to deploy the parachute. This Hot Gas Deployment Device (HGDD) houses a small gas generator in which nitrocellulose is used to create pressure. A battleship version out of aluminum has been successfully tested twice. During the summer test campaigns will be performed with a composite casing to move towards the Stratos IV flight design.

Test bench upgrades – To ensure that the wind tunnel tests are done to the standard PRG upholds, it was decided to upgrade the test bench to automatically deploy a parachute and measure the performance of the parachute. First versions of the new system have been used in wind tunnel campaigns in March and May. The system is being iterated to optimize the time necessary for one wind tunnel test, so we’re able to work as efficiently as possible.

The PRG team came from the capsule team, which started out as a sub-team of the Stratos II project. In this project, the team was responsible for the structural integrity of all the components above the engine as well as for the recovery system. The main components that were designed and produced were the glass fibre nosecone shell, the payload section and a dual-spring-deployed parachute system.

The whole capsule section was designed with numerous iterations and tests along the way. Eventually, the final design for Stratos II and Stratos II+ was developed. This was composed out of a double clamp band system held together by spring steel. At predetermined moments this steel band would release, deploying the drogue and the main parachute, respectively. On top of this dual parachute system was the payload section, with a U-shape rack housing the external scientific payloads. To finalize the capsule, the inboard electronics were housed in the top of the nosecone, combined with an antenna for data telemetry and video down-link

After the Stratos II+ flight, many team members left the society to graduate. This meant that a young and new team was tasked with the continuation and the development of the Aether recovery system. The team decided to build a modified version of the famous DARE CanSat launcher to test the Aether recovery concept. The flight was successful for most of the subsystems. However, a broken line caused the rocket to crash. More information on the flight can be found here.

After Stratos II+ the next large-scale project within DARE is project Aether. This project is a collaboration between multiple teams of which the PRG team is one of them. PRG is responsible for the complete recovery system of the rocket.

In March 2017 the project got delayed due to technical problems. This allowed the team more time to develop and improve the sub-systems of the rocket. Just after the summer of 2017 the team rapidly expanded with multiple new members, most from DARE’s first-year project. This allowed the team to start the development of new innovative systems.

The nosecone of Stratos III will be recovered because all payloads and important flight data will be stored there. The motor and tank are discarded since it would increase the recovery system mass significantly. The recovery of Stratos III will happen after the rocket has reached apogee. After the apogee, the tank will separate from the nosecone. This separation will make the recovery of the rocket easier since the nosecone will go into a flat spin that will cause an increase in drag.

Because the nosecone will be spinning, a large parachute cannot be deployed, since it would entangle with the nosecone and therefore, it would not inflate. To stop the spin, a small drogue parachute will be deployed. This drogue parachute is made from Twaron, a light and strong para-aramid material. Furthermore, to ensure that the lines of the drogue do not entangle, a cold gas deployment device (CGDD) is used. This system will shoot the drogue at a velocity of 20 m/s.